Paris, France's capital, is a major European city and a global center for art, fashion, gastronomy and culture.

For centuries Paris has been one of the world’s most important and attractive cities. It is appreciated for the opportunities it offers for business and commerce, for study, for culture, and for entertainment; its gastronomy, haute couture, painting, literature, and intellectual community especially enjoy an enviable reputation. Its sobriquet “the City of Light” (“la Ville Lumière”), earned during the Enlightenment, remains appropriate, for Paris has retained its importance as a centre for education and intellectual pursuits. 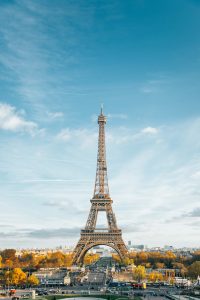 The Eiffel Tower is a wrought-iron lattice tower on the Champ de Mars in Paris, France. It is named after the engineer Gustave Eiffel, whose company designed and built the tower.

Locally nicknamed "La dame de fer" (French for "Iron Lady"), it was constructed from 1887 to 1889 as the centerpiece of the 1889 World's Fair and was initially criticized by some of France's leading artists and intellectuals for its design, but it has become a global cultural icon of France and one of the most recognizable structures in the world. The Eiffel Tower is the most visited monument with an entrance fee in the world; 6.91 million people ascended it in 2015. The Tower was made a Monument historique in 1964 and named part of UNESCO World Heritage Site ("Paris, Banks of the Seins") in 1991.

The tower has three levels for visitors, with restaurants on the first and second levels. The top level's upper platform is 276 m (906 ft) high, it's the highest observation deck accessible to the public in the European Union. 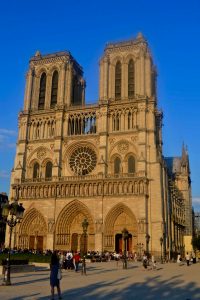 Notre-Dame de Paris (meaning "Our Lady of Paris"), referred to simply as Notre-Dame, is a medieval Catholic cathedral on the Île de la Cité (an island in the Seine River), in the 4th arrondissement of Paris. The cathedral, built in 1163, dedicated to the Virgin Mary, is considered one of the finest examples of French Gothic architecture. Several of its attributes set it apart from the earlier Romanesque style, particularly its pioneering use of the rib vault and flying buttress, its enormous and colourful rose windows, and the naturalism and abundance of its sculptural decoration. Notre Dame also stands out for its musical components, notably its three pipe organs (one of which is historic) and its immense church bells. The cathedral is one of the most widely recognized symbols of the city of Paris and the French nation.

With more than 12 million visitors annually, Notre Dame is the most visited monument in Paris. 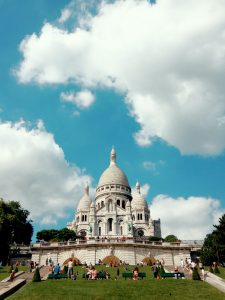 Sacré-Cœur Basilica is located at the summit of the butte Montmartre, the highest point in the city. It is a popular landmark, and the second-most visited monument in Paris. Sacré-Cœur Basilica has maintained a perpetual adoration of the Holy Eucharist since 1885. The basilica was designed by Paul Abadie. Construction began in 1875 and was completed in 1914. The basilica was consecrated after the end of World War I in 1919.

It is considered as both a political and cultural monument, representing a national penance for the defeat of France in the 1870 Franco-Prussian War and for the actions of the Paris Commune of 1871. 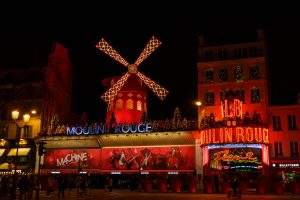 From Pigalle to the Latin Quarter, the Paris nightlife scene is thriving, and a Parisian nightlife experience is second to none! From posh to historical, and everything in between, Paris promises clubs, cabarets and all-night parties – not to mention, the time of your life during a night out in Paris.

Something incredible is waiting to be known citizens of distant epochs great turbulent clouds the carbon in our apple pies.

Walking vacation in North Cyprus
From $

Something incredible is waiting to be known a very small stage in a vast cosmic arena of stellar alchemy and invent the universe.